The terrorist threat level in Sweden is currently at a level 3, "elevated threat". This means that an attack could happen. The police have, therefore, produced new information on how the public should act in the unlikely event of an attack. 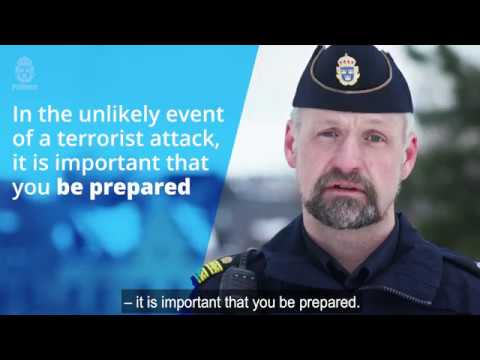 Terrorist attacks, directed at and affecting the public, have been carried out in Sweden as well as in the world around us. The likelihood that an individual, such as yourself, will be caught up in a terrorist attack is very low, but the consequences could be very serious.

– In the unlikely event that you are caught up in, or in the vicinity of a terrorist attack, it is important that you be prepared. In order to jointly reduce the consequences of an attack, the Swedish Police would like to offer the following advice and recommendations, says Jonas Hysing, Head of National Counter Terrorism Council, National Operations Department.

Escape (if you can):

Leave the location, if possible. You and other members of the public are a target. Make a habit of locating emergency exits etc.

Find cover (hide, if escape is not possible):

If you can't leave the location, find a place you deem to be safe and which provides protection. Pay attention to what you see and hear. Silence your phone and don't make any unnecessary calls to people who may be present in the danger zone.

It is the task of the police to disrupt an ongoing attack. Call 112 as soon as practically possible.

We need to know: the location, what happened, how many suspects did you see, what weapons did they use, what do they look like and where did you last see them?

Be prepared for the possibility of a further terrorist attack.